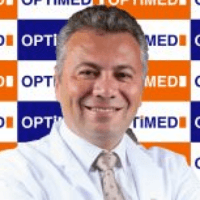 About the Department of Bariatric Surgery at Kesler Clinic Tekirdag

The Department of Bariatric Surgery at the Kesler Clinic Tekirdag offers all modern surgical interventions to treat morbid obesity. The surgical interventions are performed only for patients with a body mass index of 35 and above. The department specializes in sleeve gastrectomy, classical gastric bypass surgery, mini gastric bypass surgery, as well as combined weight loss interventions with simultaneous performance of two types of bariatric procedures. The surgical treatment is performed in high-tech operating rooms specially adapted for such narrowly focused operations. In addition, the interventions are performed using laparoscopic techniques, which significantly reduces the risk of postoperative complications and speeds up patient recovery. Over the entire period of clinical work of the medical facility, the team of bariatric surgeons has performed more than 3,500 bariatric procedures of varying complexity, and therefore it has a rich and successful experience in its field of competence. The main goal of the clinical practice of the department's doctors is to help the patient lose excess weight and gain a chance for a healthy life in a new body.

The department is headed by Dr. med. Onur Kesler. The surgeon has tremendous clinical experience, while his success in the field of bariatric surgery is widely known not only in Turkey, but also abroad.

The admission of the patient to the clinic is followed by an initial consultation, after which he is appointed the whole range of diagnostic tests that allow the doctor to comprehensively assess his health and suitability for surgery. Important attention is also paid to a detailed analysis of the patient's medical history, since bariatric surgery is an extreme measure in the fight against obesity, and specialists resort to it only if all conservative treatments (diet therapy, drug treatment, physical activity) have exhausted themselves, but the patient has not managed to get rid of his extra pounds.

The most common and preferred type of bariatric surgery is gastric bypass surgery. The department's specialists perform the operation laparoscopically, which eliminates the need for a large incision or opening the anterior abdominal wall. When performing gastric bypass surgery, the surgeon forms a small reservoir ("small stomach") in the upper part of the organ with a capacity of up to 30-40 ml, to which he sutures the small intestine bypassing most of the stomach, which ensures fast passage of food into the small intestine. The high efficiency of this operation is due to the fact that the patient will eat much less food, and its absorption will decrease due to the direct connection of the "small stomach" with the small intestine. The operation takes about one and a half hours and the patient will be discharged on the third day after the intervention. It is noteworthy that gastric bypass surgery allows not only to effectively fight against excess weight, but also has a positive effect on the health of patients suffering from diabetes, hypercholesterolemia and other pathologies.

In the clinical practice of the department, mini gastric bypass surgery is also widely used. The operation gives excellent results in the fight against excess weight. It involves two main stages – connecting the stomach with a rather distant part of the small intestine, as well as dividing the stomach into two parts to reduce its volume to 80 ml. Thus, the procedure helps to limit the amount of food consumed at one time, reduce the absorption of nutrients and reduce the production of hormones that cause hunger. The operation is performed laparoscopically, while its duration is 40-60 minutes. Three days after surgery, the patient will be discharged and he can return to his usual life.

Sleeve gastrectomy is another effective bariatric procedure that the department's doctors specialize in. When performing sleeve gastrectomy, the surgeons remove most of the stomach and form a narrow sleeve from the remaining organ tissue. The operation is performed laparoscopically, without opening the anterior abdominal wall. Its duration does not exceed 40 minutes. As a result of this intervention, the amount of food consumed is significantly reduced. In addition, the surgery facilitates the decreased levels of the ghrelin hormone responsible for the feeling of hunger, which is produced in the stomach. If the patient follows all postoperative recommendations, he can lose approximately 85-90% of excess weight. In the first 6 months after surgery, weight loss occurs very quickly, but then the process slows down a little.

In recent years, the department has successfully used combined bariatric interventions, which give tremendous results. For example, the surgeons quite often combine sleeve gastrectomy with mini gastric bypass surgery. The combination of two highly effective techniques allows getting rid of excess weight as soon as possible, and also gives the best chances for long-term maintenance of the result.

Dr. med. Onur Kesler is the Head of the Kesler Clinic Tekirdag, as well as the Chief Physician of the Department of Bariatric Surgery at the same clinic. The specialist received his medical education at the Faculty of Medicine of Istanbul University – in 2003 he received his Doctorate in Medicine. In the same year, the doctor completed an internship in the Department of General Surgery at the Sisli Etfal Training and Research Hospital in Istanbul. Until 2009, Dr. Onur Kesler had his specialized training in General Surgery. This was followed by a position in the Kahramanmaras Yenisehir State Hospital, where the specialist established an Endoscopy Unit and was engaged not only in patient care, but also in the training of medical specialists in the field of endoscopic procedures.

The doctor has always had a particular interest in laparoscopic surgery. After many years of clinical practice in the field of laparoscopic interventions for the treatment of tumors, gastroesophageal reflux disease and other pathologies, the doctor underwent a highly specialized training in Bariatric Surgery at the Faculty of Medicine of Istanbul University. During his clinical work in this field, Dr. Onur Kesler has already performed more than 3,500 bariatric interventions, which have helped save many lives of patients suffering from morbid obesity. He specializes in sleeve gastrectomy, classical gastric bypass surgery, mini gastric bypass surgery, as well as combined weight loss interventions with simultaneous performance of two types of bariatric procedures. 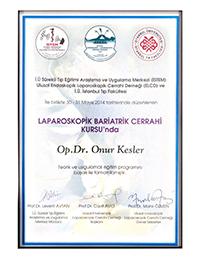