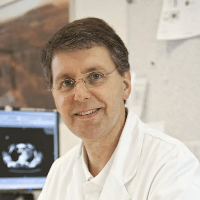 About the Department of Radiation Therapy at Academic Hospital Cologne-Merheim

The Department of Radiation Therapy at the Academic Hospital Cologne-Merheim offers all types of modern radiation therapy at the highest level. The department has two high-power Elekta Synergy linear accelerators and a device for the therapy using afterloading technique. The irradiation regimen is planned using Toshiba Aquilion Large Bore computed tomography scanner with the gantry aperture of 90 cm. The combined chemoradiation therapy can also be carried out in collaboration with relevant specialists. In most cases, radiation therapy is performed on an outpatient basis, without obligatory hospitalization. The team of the department's doctors strictly adheres to all radiation protection standards. The department is headed by Dr. med. Eckhard Ingenhoff.

The competence of the department’s doctors includes the treatment of malignant and benign diseases. When treating oncopathologies, the doctors maintain close cooperation with the specialized centers, such as the Colon Cancer Center, the Breast Center, the Lung Cancer Center and the Cancer Center. The specialists of the department mostly deal with the treatment of patients with lung, breast, gastrointestinal cancers, brain tumors, head and neck tumors, genital tumors in women and men.

The patients receive medical care from a highly motivated, specially trained team of professionals for working with cancer patients, which includes technical assistants, doctors and physicists.

The main focuses of the department's clinical practice include: