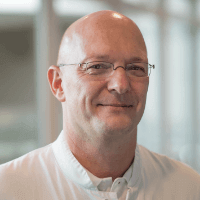 The Department of Bone Marrow Transplantation at the DKD HELIOS Clinic Wiesbaden specializes in autologous and allogeneic bone marrow transplantation according to the modern standards of European medicine. The preparation and follow-up care of patients after the therapeutic procedure are also within the competence of the medical facility. In most cases, bone marrow transplantation is performed in patients with severe forms of anemia, leukemia, lymphomas, multiple myeloma, immunodeficiency disorders, some solid malignant tumors and other pathologies. The department's doctors work closely with specialists from the Department of Hematology and Oncology. Prior to bone marrow transplantation, the specialists carry out comprehensive diagnostics and assess both benefits and risks of using this therapeutic technique. Particular attention is also paid to high-quality patient care after transplantation in order to prevent the development of complications, including graft versus host disease (GVHD). The department is headed by Dr. med. Arne Brecht.

Prior to either autologous or allogeneic bone marrow transplantation, the patient undergoes a complex of diagnostic examinations to assess his overall health condition and exclude the presence of contraindications to the therapeutic procedure (serious infectious diseases, resistance to chemotherapy, kidney and liver failure, progressive heart and respiratory failure may be contraindications). The first stage of the diagnostics is the study of the patient's medical history and a clinical examination. The doctors then conduct a biochemical test, PET-CT scanning to detect metastases, bone marrow aspiration biopsy or trepanobiopsy followed by laboratory tests and other procedures. If all clinical indicators are satisfactory, the patient will undergo bone marrow transplantation.

Autologous bone marrow transplantation involves the use of the patient's own stem cells. The collection of autologous stem cells takes place prior to high-dose chemotherapy, which is an obligatory part of the therapeutic process for this type of transplantation. The resulting cells are frozen until the procedure is performed. After the completion of the course of chemotherapy, the patient's stem cells are injected into his body intravenously. A healthy bone marrow will be formed in the human body within several weeks. This bone marrow will properly perform hematopoietic and other functions. The essence of allogeneic transplantation is almost the same. The only difference is that allogeneic bone marrow transplantation involves the use of donor stem cells. When performing this type of transplantation, the main task is to select the most compatible donor in order to prevent the development of the graft versus host disease – the rejection of the transplanted donor material. Like autologous transplantation, allogeneic one is performed in a sterile isolation ward, which reduces the risk of infectious complications. The duration of the procedure is 1-2 hours. The patient follow-up and the intake of immunosuppressive drugs to prevent the development of graft versus host disease play a key role in the success of any type of transplantation.

The department performs bone marrow transplantation for the following indications:

The department's key clinical focuses include: