Department of Dermatology and Venereology

Department of Dermatology and Venereology (381397) 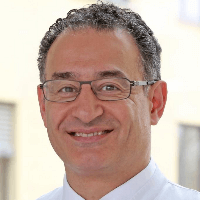 About the Department of Dermatology and Venereology at HELIOS Clinic Krefeld

The Department of Dermatology and Venereology at the HELIOS Clinic Krefeld offers the full spectrum of services in these medical focuses. The department specializes in the diagnostics and treatment of all skin diseases, allergies and sexually transmitted diseases. Here are used only advanced methods of treatment, which correspond to the high standards of international medicine. The department is headed by PD Dr. med. Chalid Assaf.

Among the most important focuses of the department is the diagnostics and treatment of skin cancer. The most common oncological skin diseases include basal cell carcinomas (white skin cancer) and malignant skin melanomas (black skin cancer). To identify basal cell carcinoma, photodynamic diagnostics is mostly used, while the detection of malignant skin melanoma requires a biopsy of the suspicious tissue and sentinel lymph node biopsy. Depending on the type of cancer, tumor localization and the stage of its spread, optimal individual therapy is selected.

In most cases, skin cancer requires surgical intervention. The specialists of the department prefer to conduct a three-dimensional histology, which is an absolutely safe treatment method. In extensive operations, further reconstructive interventions are also performed, for example, skin grafting from other parts of the body. In addition, the therapeutic possibilities of the department include conservative treatment: chemotherapy, electrochemotherapy, radiation therapy, immunotherapy, cryotherapy, photodynamic therapy, extracorporeal photopheresis, etc. For patients with progressive stages of skin cancer, there is offered an opportunity to participate in national and international clinical trials.

In addition, the range of the department’s services is complemented by the diagnostics and treatment of autoimmune skin diseases. Patients with such pathologies are offered the latest methods of therapy, which are selected individually and act locally on the affected area of the skin. The treatment methods include extracorporeal photopheresis, immunoadsorption, immunobiological therapy, and many other methods.

In the field of venereology, both diagnostics and treatment of all sexually transmitted diseases are offered.

The range of medical services of the department includes: