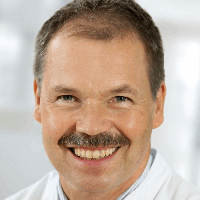 About the Department of Pediatric Surgery at Helios Hospital Berlin-Buch

The Department of Pediatric Surgery at the Helios Hospital Berlin-Buch offers the full range of surgical treatment for congenital and acquired diseases, as well as injuries in young patients. If possible, the operations are performed using sparing minimally invasive techniques, which significantly reduce hospital stay. Some operations may be performed on an outpatient basis. The doctors also have in their arsenal the very latest laser and cryotechnologies, which can be used, for example, for scar revision and lymphangioma treatment. The department is distinguished by exceptional experience and outstanding results in the correction of pectus excavatum in children. The department is headed by Prof. Dr. med. Dr. h. c. Klaus Schaarschmidt.

The department's surgeons specialize in highly effective surgical treatment of cancer in children – from newborns to teenagers. Since oncopathology is a complex therapeutic task, the treatment can take a lot of time. To make the child feel as comfortable and safe as possible, he and his parents can be accomodated in the same room (Rooming-in). The department mostly admits patients with such tumors as nephroblastoma, neuroblastoma, hepatoblastoma, mediastinal tumors and metastasis in the abdominal and thoracic  organs. With appropriate indications, the department's doctors prefer minimally invasive surgery.

One of the priority focuses of the department's clinical activities is pediatric traumatology. The tasks of doctors in this field include not only the treatment of bone fractures, but also the surgical removal of cysts and other pathological bone lesions. The treatment of fractures is performed using Prévot technique and intramedullary osteosynthesis.