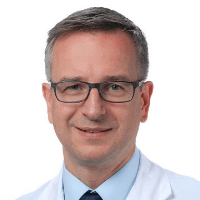 About the Department of Mammology at Hirslanden Andreasclinic Cham Zug Cham

The Department of Mammology at the Hirslanden Andreasclinic Cham Zug Cham offers the full range of medical services in the area of its specialization. The competence of the department's specialists includes counseling, diagnostics, treatment and follow-up monitoring for benign and malignant breast diseases. The main focus is on the treatment of breast cancer. The department is certified by the Swiss Cancer League, as well as by the Swiss Society of Senology. The department is headed by PD Dr. Nik Hauser.

The treatment is based on an interdisciplinary approach, which involves the participation of doctors from related disciplines – gynecologists, oncologists, radiation therapists, plastic surgeons and others. The treatment course is developed for each patient individually, taking into account particular clinical indications, age, stage of the disease and other factors.

As a rule, a detected breast tumor should be removed surgically. If the size of the tumor and the stage of cancer allow the doctors to perform a minimally invasive intervention, then such an operation is indicated. This type of surgery provides rapid recovery of the patient and minimal risks of complications. If possible, the surgeons preserve the breast. If it is not possible, then plastic reconstructive interventions are performed. The surgical treatment is complemented by such methods as chemotherapy and radiation therapy.

In addition, the department's therapeutic offer is complemented by cancer rehabilitation programs. The purpose of such programs is to restore working capacity, improve self-esteem and maintain positive attitude, which in combination facilitates reintegration into everyday life.