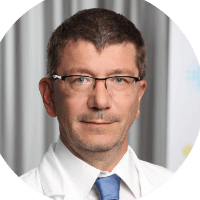 69 Booking Health patients have already received treatment in the Department of Adult and Pediatric Proton Therapy at the Proton Therapy Center Prague.

95% of patients recommend this hospital and department.

The Department of Adult and Pediatric Proton Therapy at the the Proton Therapy Center Prague offers the most advanced and accurate form of radiotherapy currently available to treat various cancers. The department has 5 specialized treatment rooms equipped with state-of-the-art technology, including IBA Proton Technology, Pencil Beam Scanning, Patlog™ from a Swedish firm called ONCOlog etc. The department also has a specially designed room for eye treatment. A feature of the department is that it deals with the treatment of young patients. Each specialist working here sets a goal not only to provide excellent treatment quality, but also to please patients with high standards of patient care. The department is headed by Asst. Prof. Dr. med. Jiří Kubeš.

The department is highly-specialized in proton therapy, which is an invisible and highly controlled beam that works by using pencil point precision to target a tumor. When it releases radiation, the radiation beam slows down, which allows the protons to interact with electrons allowing a release of high-energy. This high-energy is then released into its designated location (the tumour). As the beam is controlled by a physician, it only targets the shape and depth of a tumor to allow healthy tissue to remain undamaged.

Proton therapy is made possible through the cyclotron technology. A cyclotron is a type of particle accelerator in which charged particles accelerate outwards from the centre along a spiral path. The particles are held to a spiral trajectory by a static magnetic field and accelerated by a rapidly varying (radio frequency) electric field. The cyclotrons can be used in particle therapy to treat cancer. The ion beams from cyclotrons can be used, as in protons therapy, to penetrate the body and kill tumours by radiation damage, while minimizing damage to healthy tissue along their path.

Proton therapy is considered a better way to treat cancer because it has fewer side effects, but the technology is expensive. The majority of proton centres throughout the world currently use "scattered beam" nozzles to deliver the protons to cancerous tumors. Although the scattered beams are extremely effective, the department is among the leaders who use even more effective and very precise "pencil-beam" technique.

Proton therapy is based on the use of positively charged elementary particles of hydrogen atom nuclei – namely protons that have a weight much higher than that of electrons. Protons are accelerated in a cyclotron to a speed equal to approximately half the speed of light. This also determines their energy, which reaches up to 230 MeV (mega-electron volts) and enables them to damage tumors up to a depth of approximately 30 cm. The protons are then targeted with a strong magnetic field into a very narrow beam (a "pencil beam") and transferred with a high degree of accuracy via a 3D image to the malignant tumor. Energy is released during deceleration in the tumor tissue with subsequent ionisation and damage to the DNA of the affected cell. If the damage is sufficient, the cell stops dividing (and growing) or dies immediately.

Such physical properties of the proton beam as low entry dose, maximal dose of energy at the required depth and a zero exit dose enable extremely precise modulation of dose distribution inside the patient’s body and represent the main advantage of proton radiotherapy. Due to this feature, it is possible to increase the dose directed at the tumor to a level above that which could be achieved using common, conventional X-ray radiotherapy techniques, and at the same time the doctor can reduce the dose to surrounding tissues that are sensitive to the harmful effects of radiation.

An integral part of each treatment scheme is an individual planning of the proton therapy procedure. To this end, the department has several high-tech systems that allow the doctors to clearly imagine the true size, shape and position of tumors. By combining a radiation oncology information system (MOSAIQ) and the other various high-end 3D and 4D imaging systems, the department's specialists are able to obtain a comprehensive understanding of a tumour and the treatment options available.

Special attention should also be given to the modern patient positioning systems within every treatment room. These systems serve to support and position patients with submillimeter accuracy to allow the proton beam to be delivered with great precision to any point in the patient from any angle.

All treatments and examinations are usually performed on an outpatient basis, but it is worth noting that children usually require hospitalization (hospital stay is provided by the department's partner – University Hospital in Motol).

In some cases, patients may need a combination of proton therapy and chemotherapy. To this end, the department offers specially designed rooms for chemotherapy treatment and competent medical staff.

The department specializes in proton therapy for the following types of cancer:

With a great deal of clinical experience from several institutions as a radiation oncologist, Dr. med. Jiří Kubeš is a specialist in prostate cancer, as well as head and neck tumours. He joined the Proton Therapy Center Prague in 2012 and became the Medical Director in January 2014. Dr Kubeš is an Assistant Professor at the Charles University and the Institute for Postgraduate Education in Medicine.