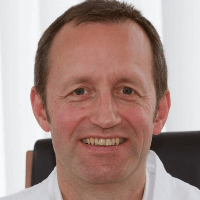 About the Colorectal Cancer Center at Academic Hospital Schlosspark Berlin

The Colorectal Cancer Center at the Academic Hospital Schlosspark Berlin offers the full range of highly accurate diagnostics and effective treatment of bowel cancer, as well as follow-up monitoring of patients with this diagnosis. As a rule, an individual treatment regimen is developed for each patient. It is based on the surgical resection of the tumor and the affected areas of the intestine. The experts of the center pay attention to the prevention of bowel cancer. The center offers modern screening programs to prevent the development of the pathology or detect it at the initial stages. The head of the center is Dr. med. Thomas Rost.

The bowel malignancies often develop from benign polyps. The timely detection and removal of suspicious polyps can prevent the development of a malignant process. The key risk factors include faulty nutrition with high content of saturated fats, overweight and genetic predisposition. Such diseases as familial adenomatous polyposis, Gardner's syndrome, Oldfield's syndrome and inflammatory bowel disease are also associated with an increased risk of cancer. This pathology is more common in patients over the age of 40.

As a preventive and screening examination, the patients are offered such procedures as fecal occult blood test, sigmoidoscopy, colonoscopy, CT scan, MRI, immunological and molecular tests.

If colorectal cancer is suspected, the specialists set themselves the goal to detect the exact location of the malignant process, as well as its stage. The standard diagnostic method is colonoscopy. It is worth noting that benign polyps can be removed even during the diagnostic procedure. A histological examination plays a key role in the assessment of the tumor characteristics, including the degree of its invasion and lesion of the lymph nodes, the presence of metastasis.

When performing surgical procedures for colorectal cancer, the affected part of the intestine with blood vessels and lymph nodes will be completely removed. In case of colorectal cancer, intestinal integrity can be restored by means of anastomosis. In some cases, in rectal lesion, a stoma (a surgical hole, which is formed to remove the contents of the intestine) is placed to the anterior abdominal wall.

The surgeons of the center successfully perform operations to resect intestinal neoplasms using minimally invasive techniques. Such operations are as effective as open surgery, but they allow the doctors to avoid traumatic incisions of the anterior abdominal wall and lesions of the internal organs. The minimally invasive treatment is also characterized by a less severe pain syndrome and avoids extensive blood loss, which in turn significantly reduces the period of postoperative hospitalization.

The surgical treatment is often supplemented by adjuvant therapy (drug therapy after radical surgery). For example, adjuvant chemotherapy is carried out to achieve the optimal result in the treatment of advanced stages of colorectal cancer, which are characterized by lesions of the lymph nodes or tumor invasion into the adjacent organs. The goal of this therapeutic measure is to prevent the recurrence of bowel malignancy or the spread of the malignant process to other organs, such as the liver. It is worth noting that the center uses the very latest chemotherapeutic drugs, which can successfully cure even particularly complex clinical cases.

After completing treatment, each patient will be necessarily monitored by a specialized doctor and undergo diagnostic tests (for example, ultrasound scanning, colonoscopy, laboratory tests) in order to assess general health and prevent the relapse of the disease.

The key clinical focuses of the center include: