Department of Traumatology and Hand Surgery

Department of Traumatology and Hand Surgery (333746) 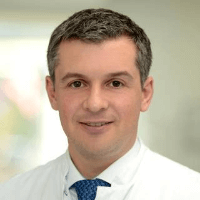 About the Department of Traumatology and Hand Surgery at St. Vincentius Hospital Karlsruhe-Academic Hospital of the University of Freiburg

According to the FOCUS magazine, Professor Lehmann, who conducted many operations, consultations, and also published a large number of scientific papers, was recognized as one of the best surgeons specializing in shoulder surgery.

In addition to providing emergency care for hand injuries, the doctors of the department are also engaged in treatment of acquired changes in the functions of the hand. Hand surgery can also be carried out on an outpatient basis following the safety standard of the clinic.

The department specializes in the treatment of all diseases and injuries of the shoulder and elbow joints, as well as their consequences. Treatment of each patient begins with an individual consultation and a thorough clinical examination. If all conservative methods of treatment do not give positive results, the patient is offered surgical treatment: from minimally invasive arthroscopic interventions to all kinds of open surgery and endoprosthetics. Of particular importance are repeated interventions, muscle transplantation, replacement of prostheses and treatment of complex fractures.

Treatment areas of the department cover:

The department treats such diseases:

Since April 1, 2014, Prof. Dr. Lars-Johannes Lehmann is the Head of the Department of Traumatology.

The main clinical areas include shoulder and elbow surgery, sports traumatology and the most severe injuries (polytrauma, emergency medicine).

Scientific activity of the doctor completely coincides with the clinical areas of specialization.

After defending his doctoral dissertation on the topic of diagnosing patients with injuries of the highest severity, the professor began publishing scientific works in the direction of his specialization and in the treatment of upper extremities. Particular attention is paid to the replacement of artificial joints, sports injuries and muscle plasty.

In the German Society of Surgery of the Shoulder and Elbow Joint (DVSE), the professor holds the position of the 1st Vice President and Chairman of the Commission "Guidance and Evaluation". Professor Lehmann is the scientific director of the journal Obere Extremität, the author of many textbooks and reviewer of numerous scientific journals in the field of orthopedics and traumatology.

Since 2013, Professor Lehmann regularly enters the rating of the best specialists of Focus magazine in the field of shoulder surgery.

Department of Traumatology and Hand Surgery.
St. Vincentius Hospital Karlsruhe-Academic Hospital of the University of Freiburg: