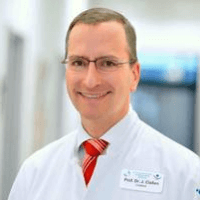 The main directions of the Department of Radiation Therapy and Radiological Oncology at the St. Vincentius Hospital-Academic Hospital of the University of Freiburg include intensively modulated radiation therapy (IMTT and rotational therapy with modulation of the radiation dose), combined radiotherapy, brachytherapy (eg, prostate cancer, cervix, breast and esophagus). The department has 33 beds.The head of the department is Prof. Dr. med. Johannes Claßen.

A medical team of experienced doctors, nurses and physiotherapists takes care of patients. Also, the services of art therapists, a psychologist, the service of churches of both denominations are offered here.

The department performs modern technical procedures for the treatment of oncological diseases. In addition, radiation therapy has been successfully used here to treat degenerative or inflammatory diseases of the joints and connective tissues (eg heel spurs, tennis elbow, arthritis).

The department positions itself as the center of excellence in stereotactic high-precision irradiation of brain, lung and liver tumors. This method of tumor treatment often does not lead to side effects, produces particularly effective results, and can even eliminate the need for surgery.

The department of Radiation Therapy and Radiological Oncology offers a wide range of modern treatment methods of malignant and benign tumors and other diseases that can be cured with radiation therapy. The most important directions of the department are combined radiotherapy (eg, lung, head, neck of the gastrointestinal tract and female genital organs), brachytherapy (eg, tumors of the prostate gland, esophagus, respiratory tract, head, neck or female genital organs) and highly conformal irradiation methods (intensively modulated radiation therapy - IMML - stereotactic irradiation).