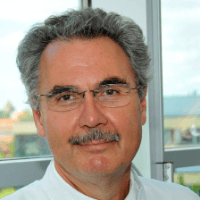 The Department of Gastroenterology, Endocrinology, Nephrology and Rheumatology at the University Hospital Greifswald offers the full range of first-class medical care for patients with diseases of the gastrointestinal tract, liver, kidneys, including arterial hypertension, endocrine glands, as well as with rheumatic pathologies. One of the key focuses of the department is the therapy of oncological diseases of the gastrointestinal tract (certification of the German Cancer Society). To this end, the department has in its arsenal a variety of surgical techniques, modern types of chemotherapy and radiation therapy, pain therapy, etc. The competent specialists with long experience, who have gained an excellent reputation in Germany and abroad, take care of the health of patients. The department is headed by Prof. Dr. med. Markus Lerch.

He received his doctoral degree (magna cum laude) in Freiburg in 1984 for experimental studies on the pathophysiology of the exocrine pancreas in renal insufficiency. After a Pathology Internship in Freiburg he completed a residency in Internal Medicine at the Technical University of Aachen. On a DFG research scholarship he spend three years at Harvard and the University of Milano, Italy, where he was trained in Pathophysiology and Cell Biology. After the fellowship in Ulm and his board certification in Gastroenterology (1993), he obtained his second doctorate (habilitation) in 1994, for work on the cell biology of pancreatitis, from the University of Ulm.

He then moved to the Max Planck Institute for Biochemistry in Munich to join the Molecular Biology Department of Axel Ullrich as a Staff Scientist and was board certified in Biochemistry. After serving as an Assistant Professor and Consultant Gastroenterologist in Homburg (Saar), and as tenured Associate Professor at the University of Muenster (1997 - 2003) he accepted the Professorship at the University of Greifswald (founded in 1456) where he was appointed the Head of the Department of Gastroenterology, Endocrinology, Nephrology and Rheumatology (2007).

The research of his group focuses on the pathophysiology, cell biology and genetics of pancreatic disorders and is by design translational. His research has been supported by the European Union (EU-FP7, EU-EFRE), the German Research Foundation (DFG), the German Federal Ministry of Science and Education (BMBF) and the German Cancer Aid (Deutsche Krebshilfe), as well as several foundations and charities.

The implementation of a bench-to-bedside strategy for this translational research found its way into three investigator initiated clinical trials (e.g. ISRCTN 00142233 & ISRCTN 46556454) and to several patent applications and patents (e.g. EP06776693.1, EP10164624, EP11167708), particularly in the area of biomarker development. Prof. Lerch is an elected Study Section Member (Grants Committee of the German Research Foundation) since 2008 and was appointed by the President of the Federal Republic to serve on the Council of Science and Humanities of the German government in 2015.