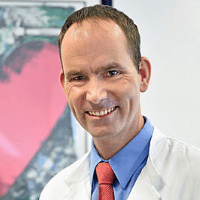 About the Department of Cardiothoracic Surgery at University Hospital Jena

According to the Focus magazine, the Department of Cardiothoracic Surgery at the University Hospital Jena ranks among the top medical facilities of this kind in Germany!

The department offers the full range of surgical treatment of diseases of the cardiovascular system and thoracic organs in adults. Of particular interest is sparing minimally invasive surgery, particularly, heart valve interventions and coronary artery bypass grafting. Such interventions are carried out using the innovative da Vinci surgical system. The video-assisted thoracic surgical methods are widely used in the surgical treatment of thoracic diseases as well. The department is headed by Prof. Dr. med. Torsten Doenst.

All the department's specialists have excellent qualifications and vast clinical experience, which in combination with the cutting-edge technologies allows doctors to achieve the outstanding treatment results. The surgeons perform many operations on heart valves without thorax resection (for example, without sternotomy), whereas bypass grafting is mostly performed in the same way. The minimally invasive tricuspid valve surgery is the new focus, in the development of which the department's specialists take an active part. The innovative methods in this field give a new hope to the patients who were previously considered inoperable. In addition, the department specializes in complex surgical interventions, which, for example, include complex operations on several valves, as well as the reconstruction of the inner lining of the heart in severe endocarditis. A completely new opportunity is the performance of bypass grafting using mini-thoracotomy.

In the field of thoracic surgery, the surgical treatment mainly involves the use of sparing video-assisted thoracic surgical techniques. Recently, the service range of the department has expanded due to the use of a surgical robot. Nowadays, video-assisted thoracoscopic surgery (VATS) can also be performed using the da Vinci surgical system in the RATS-lobectomy format (robot-assisted).

Prof. Dr. med. Torsten Doenst studied Human Medicine at the University of Göttingen and at the University of Texas at Houston (1988-1995). The Doctor also completed his research internship at the German Research Foundation, after which he became the Head of the Group of Young Specialists within the Emmy Noether Programme of the German Research Foundation in Freiburg. Dr. Doenst also underwent clinical training for the title of a Medical Specialist in Cardiac Surgery at the University Hospital Freiburg. In 1996, he defended his doctoral thesis. In 2004, Dr. Doenst had habilitation in Cardiac Surgery. After the clinically oriented one-year internship abroad at the Toronto General Hospital in Canada in 2004, he took up the position of a Senior Physician in the Department of Cardiac Surgery at the University Hospital Freiburg. In 2005 he had board certification in Cardiac Surgical Intensive Care. In autumn 2006, Dr. Doenst took up a position at the Heart Center Leipzig, where he initially worked as a Senior Physician and then as a Leading Senior Physician (2010). Here he became one of the first in Germany and the only Cardiac Surgeon who was awarded the Honorary Heisenberg Professorship, which is awarded only to the eminent scientists by the German Research Foundation.

Currently, Prof. Doenst holds the position of the Head of the Department of Cardiothoracic Surgery at the University Hospital Jena. The main clinical interests of Dr. Doenst include minimally invasive heart valve surgery, as well as surgical treatment of heart failure, including the use of mechanical cardiac support systems and heart-lung complex transplantation. He also continues research activities in his research group of more than 10 people. The focus is on the study of energy metabolism dysregulation of the heart muscle as the pathogenetic basis of heart failure.