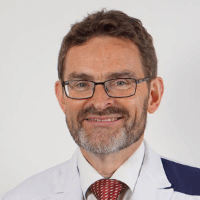 The Department of Neonatology and Pediatric Intensive Care at the University Hospital Ulm offers the full range of therapeutic services for newborns with congenital malformations, premature babies and young children with serious diseases. The department is headed by Prof. Dr. med. Helmut Hummler, who has been repeatedly ranked among the top German doctors in neonatology, according to the Focus magazine!

An important focus of the department’s work is medical care in premature labor and elimination of its consequences. Thanks to the persistent work of the department's doctors, it became possible to significantly reduce the number of cerebral hemorrhages, which are the common complication in preterm labor. The motivated medical team of the department makes every effort to ensure the highest level of safety and optimal medical care in emergency clinical situations.

In 1986, Dr. Hummler graduated from the Medical School at the University of Tuebingen, Germany. After one-year residency in Anesthesiology, Internal Medicine and Pediatrics in Germany,  from 1992 to 1995, he undertook his training in Neonatology under the guidance of Dr. med. Eduardo Bancalari, Section of Neonatology, Department of Pediatrics, Jackson Memorial Medical Center, University of Miami, Florida, USA. His main research interests were the physiological effects of patient-synchronized mechanical ventilation on the neonate.

His research interests are related to neonatal pulmonology, lung injury, mechanical ventilation, and permissive hypercapnia. More recently his research focused on the effects of hypoxemic episodes on newborns with a very low weight. Such episodes may be detected with the help of pulse oximetry and near infrared spectroscopy (NIRS). Also, he was involved in the development of a mechanical ventilator capable of using automated closed-loop feedback of FiO2 and other ventilator settings to stabilize gas exchange in preterm infants. He received the Scientific Award of the German Society of Neonatology and Pediatric Intensive Care and was awarded as a Top Physician in Neonatology in the years 2013, 2014, 2015, and 2016.