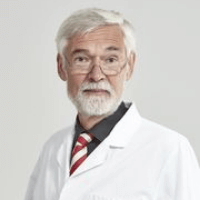 The Department of Neuropediatrics at the University Hospital Ulm offers the interdisciplinary diagnostics, monitoring and therapy for children and adolescents with developmental disorders, chronic neurological diseases, congenital and acquired disabilities. Medical care is provided to children of all age groups, ranging from newborns to adolescents under the age of 18 years. Importance is also given to parents counselling, explaining all aspects of disease and treatment strategies. The department is headed by Prof. Dr. med. Harald Bode.

A highly qualified team consisting of pediatric neurologists, psychologists, social teachers, ergotherapists, speech therapists, physiotherapists, and specially trained nurses works with the young patients. The treatment process begins with a thorough study of a medical history, comprehensive medical examination aimed at determining the current state of the child’s/adolescent’s development. Such an examination covers structured check-ups, monitoring, game forms for testing motor skills, speech, emotional and social development, perception and processing of the received information, concentration and child's behavior. In addition, the doctors perform special physical and neurological examinations to determine child’s visual and auditory abilities. With appropriate indications, laboratory tests (blood count and urine analysis), an electroencephalogram are also carried out, and the specialists from related fields are involved, for example, orthopedists, otolaryngologists, ophthalmologists, radiologists, and others. After studying all the obtained results, an optimal treatment concept is developed.

The department specializes in the diagnostics and treatment of the following neurological disorders:

The therapeutic options of the department include:

Prof. Harald Bode studied Human Medicine at the Hannover and Heidelberg Universities, after which he received the title of Medical Specialist in Pediatrics. After work in the hospitals of London, Freiburg and Basel, the doctor hold the position of Professor in the Department of Neuropediatrics at the University Hospital Ulm (1994). Since 1997 to 2000, Dr. Bode was the Vice President of the German Society of Social Pediatrics and Adolescent Medicine, and in 2001 he was appointed as the President of this society. In addition, the doctor is a member of various professional societies, commissions and scientific councils, as well as the author of many original works, book chapters and messages.