Department of Pediatric and Adolescent Medicine (223365) 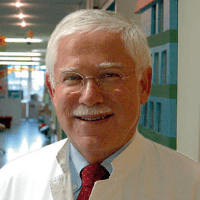 Specialized in: pediatric and adolescent medicine

The Department of Pediatric and Adolescent Medicine at the University Hospital Würzburg offers the full range of diagnostics and treatment of various diseases in children of all age groups, from premature babies of high risk groups to adolescents. The department is one of the oldest pediatric medical institutions in Germany. For 170 years of the successful clinical practice, the department has gained an excellent reputation in the treatment of children and adolescents with serious and rare diseases. The department is headed by Prof. Dr. med. Christian P. Speer.

The department's specialists annually provide their services to 6,500 young patients, while about 30,000 children receive treatment here annually within the specialized outpatient clinics. The high-tech medical equipment, innovative treatment methods, as well as the outstanding experience and knowledge of the department's doctors are the key to the optimal medical care adapted to the particular diagnosis and needs of children.

The department has the Level I Perinatal Center, which provides the competent care for premature babies from the high-risk group (whose weight is less than 500 grams at birth). Also, special attention should be given to the Stem Cell Transplant Center, which meets the European and American quality standards, due to which it has the prestigious JACIE certification. The Cancer Center of the department, which specializes in the treatment of various types of cancer in children is among top ten largest medical institutions of this kind in Germany. In addition, the department is part of the network of the Reference Centers for Rare Lung Diseases.

Prof. Dr. med. Christian P. Speer is a Member of the Royal College of Physicians of Edinburgh. He studied Human Medicine at the University of Göttingen. After his doctoral thesis defense, he began his professional medical training at the University Hospital Göttingen, during which he spent nearly two years at the National Jewish Hospital in Denver, USA. In 1986, he was appointed as a Senior Physician and in the same year he was habilitated. Soon he was appointed as the Professor of Pediatrics. In 1994, the doctor became the Head of the Department of Neonatology at the University Hospital Tuebingen, and in 1996 he was elected as a Member of the Royal College of Physicians of Edinburgh. In 1999, he held a position in the Department of Pediatrics at the University of Würzburg.

After the fundamental research on the treatment of infant respiratory distress syndrome with surfactant drugs, his current research activities focus on the role of pre- and postnatal inflammatory mechanisms in the pathogenesis of bronchopulmonary dysplasia. He has published over 300 scientific papers in the international and national journals and is the author of several chapters of books on acute and chronic lung diseases in premature babies and newborns. He is also a Co-Editor of the textbook Speer C.P., Gahr M: Pediatrics, Springer Publishing, Berlin, Heidelberg, New York, 4th edition, 2013. He is the Editor in Chief of the Neonatology Journal (formerly: Biology of the Neonate), Co-Publisher of the Zeitschrift für Geburtshilfe und Neonatologie, and has also worked in numerous editorial boards of the international scientific journals and scientific societies, for example, in research committees.

The Professor is a popular speaker at numerous congresses and symposia in Europe, North and South America, Asia and the Middle East. In addition, he regularly organizes the International Symposium on the Latest Advances in Neonatal Medicine, which has become the largest forum on the clinical science taking place not in America.

In the spring of 2016, together with Prof. Bo Sun from Shanghai, he organized the first international congress, the Neonate – an International Symposium for Asia, Shanghai.