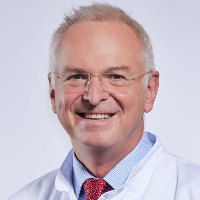 About the Department of Gastroenterology, Hepatology, Endocrinology, Infectology and Nephrology at Hospital Garmisch-Partenkirchen

The Department of Gastroenterology, Hepatology, Endocrinology, Infectology and Nephrology at the Hospital Garmisch-Partenkirchen offers the full range of preventive, diagnostic and therapeutic services to the patients with diseases of the stomach, bowel, esophagus, pancreas, liver, gallbladder and biliary tract, kidneys, as well as pathologies of the thyroid gland, parathyroid glands, adrenal glands and diabetes mellitus. The department also provides medical care to the patients with infectious diseases, including gastrointestinal infections, soft tissue infections, and severe urinary tract infections. The department's diagnostic options include comprehensive laboratory diagnostics, abdominal ultrasound examinations, as well as imaging tests of the gastrointestinal tract and endoscopy. The department's specialists work with high-tech equipment, use both conventional and advanced therapeutic methods in their clinical practice, which provide patients with fast and effective treatment. The department is one of the best medical facilities of this kind in the national medical arena.

The Head Physician of the department is Prof. Dr. med. Hans-Dieter Allescher, who has gained an excellent reputation in the field of his competence in Germany. The specialist not only provides treatment to his patients, but also successfully participates in various research projects and has repeatedly trained in well-known hospitals in America. According to the Focus magazine, the specialist ranks among the best German doctors in the field of gastroenterology and endoscopic procedures for several years now!

Gastroenterology is an integral part of the department's clinical practice. The healthcare facility deals with the diagnostics and treatment of various diseases of the gastrointestinal tract, including cancers. The department's doctors have the very latest advances for ultrasound examinations, functional diagnostics (manometry, 24-hour pH metry, hydrogen breath tests) and endoscopic diagnostic procedures (gastroscopy, colonoscopy, esophagogastroduodenoscopy, capsule endoscopy, etc.). A specific complex of examinations is prescribed individually, based on the results of the patient's clinical examination, his complaints and medical history. This is followed by the development of an optimal treatment regimen, which may include both drug therapy and endoscopic interventions. In complex cases, when a surgical intervention is required (for example, in bowel or stomach cancers at their advanced stages), abdominal surgeons are involved in the therapeutic process. The department annually performs more than 7,000 diagnostic and therapeutic endoscopic interventions, so the patients can be sure of their flawless performance. In addition to classic types of endoscopy, such as gastroscopy and colonoscopy, the department also offers advanced endoscopic interventions, such as peroral endoscopic myotomy, anti-reflux mucosal ablation (ARMA), full-thickness mucosal resection using the FTRD system, endoscopic submucosal dissection, and others. All endoscopic interventions are carried out with a well-performed anesthesia, using state-of-the-art high-resolution equipment, which guarantees a high-quality result and the highest efficiency.

The department also admits patients with diseases of the liver, gallbladder and biliary tract. The doctors have been effectively treating cirrhosis, hepatitis, alcoholic liver lesions, liver diseases caused by toxic effects of drugs, benign and malignant liver tumors, cholecystitis, gallstone disease, biliary obstruction and other pathologies for many years. The patients with hepatological diseases are most often provided with high-quality drug treatment. The department's specialists use modern drugs with proven efficacy, give recommendations on lifestyle modifications, etc. In some cases, endoscopic therapeutic procedures can also be prescribed, for example, endoscopic retrograde cholangiopancreatography and cholangioscopy.

The department has an experienced team of infectologists who carry out the treatment of infectious diseases of the gastrointestinal tract, soft tissues and urinary tract. Of particular interest is the treatment of gastroenterological infections and inflammations: gastroenteritis, diverticular disease, pancreatitis, cholecystitis and cholangitis. Antibiotic therapy is the basis of treatment, and the physicians take a responsible approach to the choice of the drug, its dosage and the duration of therapy in order to prevent the development of antibiotic resistance.

Endocrinology is represented by a separate highly qualified team of doctors who provide medical care to the patients with diseases of the thyroid gland (hypothyroidism and hyperthyroidism), parathyroid glands (hypoparathyroidism and hyperparathyroidism), adrenal diseases (Conn's and Cushing's syndrome), as well as diabetes mellitus. In most cases, it is sufficient to carry out drug therapy with hormone medications. In the case of type 1 diabetes mellitus, the department's patients receive insulin therapy in the form of injections or using a special pump. An integral part of the treatment of diabetes mellitus is the proper diet, regular monitoring of blood glucose levels, and the cessation of bad habits.

The department's therapeutic offer is complemented by the treatment of a wide range of kidney diseases: acute and chronic kidney failure, kidney lesions due to systemic diseases, secondary arterial hypertension, cardiorenal and hepatorenal syndromes. The department's specialists also provide medical care for the patients after a kidney transplant surgery. All modern types of kidney examinations are available in the department, including special laboratory tests, ultrasound examinations, and a kidney biopsy. Treatment regimens for the patients with kidney disease may include drug therapy, renal replacement therapy, immunosuppressive therapy, and other treatment methods that are prescribed on an individual basis according to the diagnosis, the patient's general health condition, age, and other factors.

The department's diagnostic options include:

Prof. Dr. med. Hans-Dieter Allescher holds the position of the Head Physician of the Department of Gastroenterology, Hepatology, Endocrinology, Infectology and Nephrology at the Hospital Garmisch-Partenkirchen. Since 2007, he is also the Medical Director of the Center for Internal Medicine at the Trauma Clinic Murnau. From August 1, 2013 to July 31, 2018, Prof. Allescher headed the Board of Medical Directors. Prior to his appointment as the Head Physician, he also worked as a Deputy Medical Director (2006 - 2013).

From 1985 to 1994, prior to his appointment as the Head of the Department of Gastroenterology, Hepatology, Endocrinology, Infectology and Nephrology at the Hospital Garmisch-Partenkirchen, the doctor was a Research Fellow, while from 1995 to 2002 he was a Senior Physician in the famous Department of Internal Medicine II at the University Hospital of Ludwig Maximilian University of Munich (under the direction of Prof. Dr. med. Dr.h.c. Meinhard Classen). From 1986 to 1988, he completed a research internship at McMaster University, Department of Physiology and Pharmacology, Hamilton, Canada. He repeatedly came as a Visiting Professor at Johns Hopkins University, Baltimore, Virginia Commonwealth University, Virginia, and the Mayo Clinic, Rochester, USA. He acted as a Tutor and Instructor in national and international courses on endoscopy several times. Between 1998 and 2002, he, together with Prof. Wessel and Prof. Feussner, temporarily headed the Working Group on Minimally Invasive Interdisciplinary Therapeutic Interventions (MITI) at the University Hospital Rechts der Isar Munich.

Special research focuses include both fundamental and clinical research projects, in particular in the field of Neurogastroenterology, Diagnostic and Interventional Endoscopy.

Prof. Allescher is a Scientific Member of several national and international specialized organizations. He was the European Representative on the Steering Committee of the International Motility Society, and in 2003 he was appointed as a Board Member of the German Society of Endoscopy and Imaging Techniques (DGEBV). In 2015, he was elected as the President of this society. In 2004, he became a Member of the Advisory Board of the Bavarian Society of Gastroenterology.

The doctor has won numerous awards for his scientific and academic achievements, for example, the Prize in the field of Gastroenterology of the Bavarian Society of Internal Medicine.