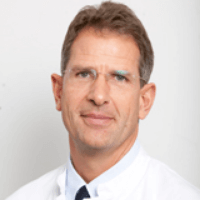 About the Department of Interventional Radiology at Marien Hospital Duesseldorf

The Department of Interventional Radiology at the Marien Hospital Duesseldorf offers the full range of services in the area of ​its ​specialization. The medical facility has an excellent technical base for the full range of imaging tests, including X-ray and ultrasound scanning, angiography, computed tomography, magnetic resonance imaging and others. Since 2004, the department has also been carrying out CT- and MRI-guided angiographic tests without a catheter. Imaging tests are indispensable in the diagnostics of many pathologies. The department also provides patients with image-guided interventional therapeutic procedures. Interventional radiology techniques are an excellent alternative to surgical treatment. Particular attention is paid to the interventional treatment of chronic pain of various localization, oncological diseases and vascular diseases. The department's specialists regularly demonstrate high treatment success rates, so patients can be sure that their health is in the safe hands. The Head Physician of the department is Prof. Dr. med. Stefan Diederich.

Many patients with chronic pain in the back and lower limbs come to the department. Pain is often relieved with painkillers in pill form, but if this treatment does not ensure the desired result, then the patient requires image-guided interventional pain management. Periradicular therapy, facet joint infiltration, sacroiliac joint infiltration, and vertebroplasty are used for the treatment of chronic back pain. The department's doctors also successfully carry out sympathicolysis for the treatment of pain syndrome caused by chronic circulatory disorders of the lower limbs and nerve plexus block for chronic pain caused by oncological diseases. A huge advantage of the above mentioned therapeutic manipulations is the absence of the need for traumatic incisions in the skin and soft tissues. In addition, when performing an interventional procedure, the doctor uses imaging devices to control each action, which guarantees the highest safety of treatment.

Another important focus of the department's specialists is on the treatment of vascular stenosis and obstruction using balloon dilatation and stent implantation. The medical facility also carries out lysis therapy for stroke in cooperation with neurologists.

The department's range of diagnostic and therapeutic services includes the following options: