Department of Vascular and Thoracic Surgery

Department of Vascular and Thoracic Surgery (591232) 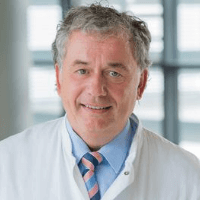 Specialized in: vascular and thoracic surgery

The Department of Vascular and Thoracic Surgery at the Municipal Hospital Karlsruhe performs all modern surgical interventions to treat diseases of the vascular system and organs of the respiratory system. In vascular surgery, special attention is paid to the treatment of atherosclerosis, carotid stenosis, deep vein thrombosis, varicose veins, abdominal and thoracic aortic aneurysms, acute and chronic aortic occlusions, diabetic foot syndrome and other pathologies. The department's team of thoracic surgeons demonstrates excellent results in the surgical treatment of diseases of the lungs and mediastinum, including lung cancer and lung metastases. The department has 30 beds for the hospitalization of its patients, including additional beds in the Intensive Care Unit. The department's doctors rarely resort to open interventions, instead preferring sparing endovascular methods, video-assisted thoracoscopic surgery and laser surgical techniques. As a result, the department's patients receive high-quality medical care that meets modern international standards, while doctors always take into account the individual needs and wishes of their patients. The department is headed by Prof. Dr. med. Martin Storck.

In vascular surgery, patients are offered all modern endovascular interventions, while open surgeries are performed only in the most complex clinical cases. The priority clinical focuses of the department's work include endovascular treatment of abdominal and thoracic aneurysms, multimodal therapy for obliterating endarteritis, shunting, endovenous surgery for varicose veins, and operations on the carotid arteries. Doctors have vast clinical experience in the surgical treatment of aortic diseases, as they perform about 70 operations for aortic aneurysms annually. In close cooperation with the Department of Neurology and the Stroke Unit, the department's surgeons provide effective medical care to patients with pathologies of the carotid arteries. In addition, the department is a certified Competence Center for Chronic Wounds (Wundkompetenznetz Mittlerer Oberrhein). The therapeutic options also include conservative and surgical treatment of venous diseases, particularly varicose veins, acute thrombosis and venous ulcers.

The specialists in the field of thoracic surgery deal with the treatment of lung cancer, pleural and thoracic wall tumors, and lung metastases. After a comprehensive examination, a patient's clinical case is considered at a regular interdisciplinary tumor board. The treatment is carried out in cooperation with the experts from the Cancer Center Karlsruhe, the Department of Diagnostic and Interventional Radiology, and the Department of Nuclear Medicine. An interdisciplinary collaboration contributes to the department's opportunities to offer its patients innovative treatment methods. These include radiofrequency ablation, transarterial chemoembolization and selective internal radiation therapy.

The therapeutic options in thoracic surgery include not only cancer treatment. The department's specialists also treat pneumothorax (video-assisted thoracoscopic surgery) and chronic pleurisy (placement of the PleurX drainage system). In addition, the department's doctors specialize in bronchoscopy (in cooperation with the Department of Pulmonology) and open lung resection, including laser resection.

Martin Storck is a Vascular Surgeon and Professor at the University of Freiburg. He is the Head of the Department of Vascular and Thoracic Surgery at the Municipal Hospital Karlsruhe. Prof. Storck is known for his scientific work on the processes of vascular wall regeneration and xenotransplantation, as well as for research in healthcare quality assurance in the field of vascular surgery.

In the field of vascular surgery, Dr. Storck regularly publishes materials on the subject of treatment quality assurance, especially it concerns the treatment of abdominal aortic aneurysm and carotid artery reconstruction. From 2006 to 2014, the doctor was a Member of the Quality Assurance Committee of the German Society of Vascular Surgery. After his habitation in 1999, he became a Professor of Vascular Surgery at the University of Marburg in the Department of General, Abdominal, Thoracic and Vascular Surgery.

In 2001, the doctor took an active part in the foundation of the Department of Vascular Surgery at the Park-Klinikum Leipzig (at the Heart Center Leipzig). In 2004, he became the Head of the Department of Vascular and Thoracic Surgery at the Municipal Hospital Karlsruhe, whereas in 2005 he accepted an offer to become an Extraordinary Professor at the University of Freiburg.

Prof. Storck is a Visiting Professor at Hirosaki University in Japan and in a group of Saudi-German Hospitals in the Middle East. He gave many well-known international lectures, such as a lecture in the Department of Surgery at Nuffield College, Oxford University. He also jointly organized and regularly gave lectures at the LINC Congress in Leipzig, as well as at the Charing Cross Symposium in London, at the Frank-Veith Symposium in New York and many other national and international congresses. Prof. Storck is actively involved in the preparation of publications on chest tumors, and his clinical activity is also concentrated in this field. He participated in the project on lung tumor diagnostics (with Leroy Penfield Faber) at the Rush University Medical Center, Chicago, USA.

Prof. Storck's research interests include renal replacement therapy in postoperative acute renal failure, experimental examinations on the regeneration of the vascular wall, as well as experimental xenotransplantation on an ex vivo model (as part of a major project of the German Research Foundation). As a member of the faculty of the University of Freiburg, Dr. Storck has teaching activities as part of his training programme, takes part in the training of medical students within one-year practice, and is also a member of the State Examination Commission. 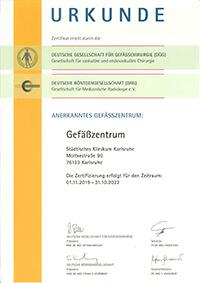