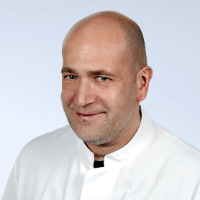 About the Gamma Knife Center at University Hospital RWTH Aachen

The Gamma Knife Center University Hospital RWTH Aachen specializes in cancer treatment. The medical facility was founded in July 1998 and currently has the status of one of the most respected and experienced in the field of its specialization. The patients are treated in close collaboration with experts in neurosurgery and nuclear medicine. For all the years of their clinical practice, the center's doctors have cured thousands of patients with cancer pathologies of varying severity. The department is headed by Dr. med. Georg Neuloh.

The researches show that the use of Gamma Knife in 90% of cases gives satisfactory results. The radiosurgical intervention in the treatment of meningioma is considered successful in case of cessation of growth or reduction of the tumor, which occurs during the examinations in the course of treatment. The recent examinations also show that Gamma Knife therapy in multiple (several) metastases leads to similar survival rates as for single metastases, which could only be treated using craniotomy, namely surgical removal. Radiosurgery does not require large expenses in comparison with craniotomy and in comparison with the costs due to complications after surgery, Gamma Knife radiosurgery is an ideal method for the treatment of most intracranial metastases.

The first stage of treatment is a thorough diagnostics and the development of an optimal treatment plan. Prior to the procedure, the patient is placed on a special couch with a fixed stereotactic frame. Once the procedure has started, the couch will move to the dome-shaped section of the device. During the session, the patient is awake and can communicate with the operator of the Gamma Knife via an audio channel. The treatment is painless. During the treatment, the patient is under constant video and audio control. Depending on the volume of the pathological neoplasm, as well as its size and shape, the treatment can last from a few minutes to an hour or more.

After the treatment completion, the doctor will remove the stereotactic frame from the patient's head. In some patients, small swelling of soft tissues may be observed at the attachment point of the frame. Minor headache is also possible. Depending on the patient's condition, he remains in the hospital or may go home on the day of the procedure. The treatment effect will appear over time. When the effect of radiation on the tumor causes the cessation of its further growth, the effect will be noticeable within a few weeks or months. In order to monitor the treatment effectiveness, such examinations as MRI, CT or angiography will be required.

Gamma Knife therapy is effective for the following pathologies: