Department of Adult and Pediatric Orthopedics (26101) 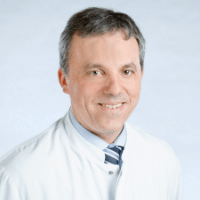 According to the Focus magazine, the Department of Adult and Pediatric Orthopedics University Hospital RWTH Aachen ranks among the top German medical facilities specializing in joint replacement surgery!

The department offers the full range of diagnostics and treatment for patients with musculoskeletal diseases. The department treats patients of all age groups ranging from young children to elderly people. The department annually treats more than 15,000 patients, and also performs about 1,500 interventions yearly. The department has long traditions, long successful clinical experience, which contributes to its reputable status in the medical arena. The department is headed by Prof. Dr. med. Markus Tingart.

One of the department's key activities is joint surgery and endoprosthetics, including revision interventions. With the support of the German Society for Orthopedics and Orthopedic Surgery, the department received the status of the Maximum Care Center for Endoprosthetics. The knee replacement surgery is carried out using cutting-edge navigation systems, which helps to achieve the optimal placement of the prosthesis shaft towards the acetabulum. Thus, the doctors provide excellent prosthesis functionality and reduce the risk of wear. Also, minimally invasive replacement techniques are widely used in the department, which help to ensure minimal traumatisation and quickest recovery of the patients. The department has all the options for high-precision diagnostics (CT, MRI) for the manufacture of individually designed prostheses.

Another priority focus of the department's work is the treatment of musculoskeletal cancers. The department's specialists have high competence and long experience in the diagnostics and treatment of bone and soft tissue tumors. The entire range of modern conservative and surgical treatment of tumors is available here. The treatment is provided in close cooperation with the Euregional Comprehensive Cancer Center Aachen.