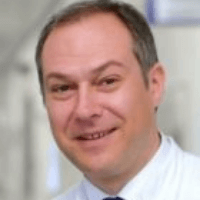 About the Department of General, Abdominal and Vascular Surgery at St. Vincentius Hospital Karlsruhe-Academic Hospital of the University of Freiburg

The Department of General, Abdominal and Vascular Surgery at the St. Vincentius Hospital-Academic Hospital of the University of Freiburg offers the entire range of relevant services at the highest level. Along with intestinal and thyroid surgeries, the most important areas of the department are minimally invasive (laparoscopic) and oncological surgery. Together with the gastroenterological clinic, the department forms one of the leading certified centers for the treatment of colon cancer, recommended by the German Cancer Society. it has three new modern operating rooms, which have been used since 2011. The head of the department is Prof. Dr. Oliver Drognitz.

A key focus of the department is minimally invasive methods. In addition to laparoscopic operations for cholelithiasis, acute appendicitis, inguinal hernia, heartburn, laparoscopic methods are also widely used in the treatment of diseases of the large and small intestine, liver and adrenal diseases.

In the treatment of malignant tumors, specialists of the department work in close contact with the specialized Departments of Oncology, Radiotherapy, Radiology and Nuclear Medicine. During weekly scientific oncologic consultations, conducted with the participation of all clinics, doctors develop a diagnostic and treatment concept based on modern scientific knowledge and achievements for each individual patient.

The spectrum of Subdivision of Vascular Surgery covers full outpatient and inpatient treatment of arterial and lymphatic vessels and veins. In close cooperation with the Department of Diagnostic and Interventional Radiology, the department uses minimally invasive methods for treatment of occlusive diseases of arteries of the abdominal cavity, pelvis and extremities. It also offers a wide range of especially sparing endovascular operative methods (implantation of stents) in abdominal, pelvic and lower limb vessels. Also there is cooperation with the Departments of Cardiology and Endocrinology (coronary artery disease, diabetic foot) for the treatment of patients of this profile.

Obtaining of a pre-qualification