Department of Gynecology and Obstetrics (113965) 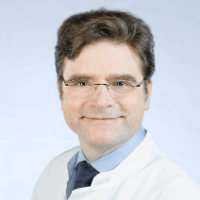 According to the Focus magazine, the Department of Gynecology and Obstetrics at the University Hospital Giessen UKGM ranks among the top Germany medical facilities specializing in obstetric services!

The department offers the full range of diagnostics and treatment in the fields of its competence. The department's obstetricians provide comprehensive pregnancy management at all its stages, including high-risk pregnancy, as well as high-quality postpartum care. The gynecological section is responsible for the treatment of benign and malignant pathologies of the female reproductive system. In addition, the department's tasks include the provision of medical care to patients with gynecological endocrine disorders and infertility. The Chief Physician of the department is Prof. Dr. med. Ivo Meinhold-Heerlein.

In the field of gynecology, the priority focus is the diagnostics and treatment of cancer pathologies of the female reproductive system. The gynecologists treat breast, uterine, cervical and ovarian cancers. The key therapeutic options include surgical resection of the tumor, chemotherapy, radiation therapy, drug therapy and pain therapy. It is also possible to participate in clinical trials.

The department's obstetricians carry out all modern invasive and non-invasive procedures (diagnostic and therapeutic) in the field of perinatal medicine. The department's patients regularly undergo examinations aimed at pregnancy monitoring. Should any abnormalities in the development of the fetus be detected, the necessary measures will be taken immediately.

The department offers around-the-clock services of the highly qualified team consisting of obstetricians, assistant physicians, anesthesiologists and surgeons, which takes care of the safe birth of a child and the health of a woman. The department has four delivery rooms designed in pleasant light colors and equipped with all the aids for childbirth. In addition, the department has two special bathrooms for relaxation baths and childbirth in the water. Each delivery room is equipped with a music center and a wide variety of CDs for relaxation. The operating room for C-section is integrated into the area of delivery rooms, which allows the doctor to take all necessary measures as quickly and efficiently as possible.

Membership in Scientific Organizations and Committees