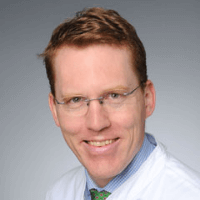 About the Department of Neurology at University Hospital Marburg UKGM

According to the reputable Focus magazine, the Department of Neurology at the University Hospital Marburg UKGM ranks among the best German medical facilities specializing in the treatment of Alzheimer's disease, Parkinson's disease and multiple sclerosis!

The department offers the full range of diagnostic studies and therapeutic methods for patients with diseases of the nervous system. The department has its in-house Intensive Care Unit, a Stroke Unit, a Section for Preoperative Epilepsy Diagnostics, a Sleep Laboratory, a CSF Laboratory and other structural units. Thus, the department has created all the conditions for providing first-class neurological care. The Chief Physician of the department is Prof. Dr. med. Lars Timmermann.

One of the key department’s activities is stroke treatment, which is provided in a specialized Stroke Unit. When providing emergency care to patients with acute stroke, thrombolysis is often performed. It allows doctors to restore the patency of the cerebral vessels. The doctors of the Stroke Unit provide medical care as quickly and efficiently as possible, which is crucial for the successful treatment. The department’s Stroke Unit treats about 900 patients every year.

An equally important focus of the department’s clinical practice is the treatment of oncological diseases of the nervous system, namely brain tumors, metastases of tumors of other locations in the nervous system and paraneoplastic syndromes. Naturally, before starting treatment, the patient undergoes the comprehensive diagnostics, including a biopsy and cerebrospinal fluid testing (if indicated). The treatment tactics are being developed jointly with experts in the field of neurosurgery, neuroradiology, radiation therapy, oncology, etc. The main treatment methods remain chemotherapy and radiation therapy, as well as combined treatment regimens.

Prof. Dr. med. Lars Timmermann studied Human Medicine at Christian Albrecht University of Kiel (1992 - 1999). During the training, the doctor also underwent many internships abroad: Baltimore, USA (Johns Hopkins University), Dayton, USA (Wright State University) and Gorleston, Great Britain (Cambridge University). In 1998, he passed the 2nd part of the American Medical Licensing Exam. In 1999, the state medical exam in Germany followed. In 2000, Dr. Timmermann received his doctorate (his doctoral dissertation was devoted to functional studies of the regeneration of sympathetic vasoconstrictor neurons after peripheral nerve lesions in rats). From 1999 to 2006, he worked as an Assistant Physician in the Department of Neurology at the University Hospital Duesseldorf. Since 2002, the doctor led the group of young researchers "Pathophysiology of motor disorders." In 2005, he had his board certification in Neurology. In January 2007, Prof. Timmermann took the position of Senior Physician at the University Hospital Cologne, where he also became the Head of the Working Group "Movement Disorders and Deep Brain Stimulation". In 2007, habilitation in Neurology followed at the University of Duesseldorf, after which in 2008 he became Professor for Motor Disorders of Neurological Origin at the University Hospital Cologne. Since September 1, 2016, Dr. Timmermann is Professor of Neurology and Head of the Department of Neurology at the University Hospital Marburg UKGM. On February 1, 2018, he also took over the management of the Center for Emergency Medicine.

Prof. Timmermann is one of the clinical experts for motor disorders of neurological origin, in particular, for Parkinson's disease, dystonia and essential tremor. His research focuses on the clinical aspects and pathophysiology of motor disorders, the effects of deep brain stimulation and physiological aging. In addition to invasive and non-invasive methods of ablation of various regions of the brain, clinical studies are in the focus of his activities. In particular, the doctor gained an international reputation thanks to fundamental research on the pathophysiology of the basal ganglia in motor disorders and clinical research on deep brain stimulation in Parkinson's disease.

Awards, Memberships and Work in the Editorial Offices

Prof. Timmerman was awarded several scientific prizes. In 2003, he received an Encouraging Award from the German Association for Parkinson's Disease. In 2004, he was awarded the BIOMAG Young Scientist Award and Young Scientist Award of North Rhine-Westphalia. He was also awarded a Prize for the Study of Rare Diseases. He also received several teaching awards at the University of Cologne. Until 2017, Prof. Timmermann was Deputy Dean of the Faculty of Medicine at the University of Cologne and a Member of numerous Faculty Committees. Timmermann is a Member of the Editorial Board of Nature's Disease, a partner in Nature, and the author of numerous book chapters.