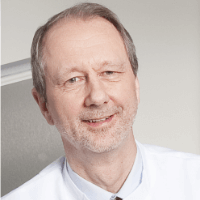 According to the Focus magazine, the Department of Adult and Pediatric Radiation Therapy, Radiation Oncology at the University Hospital Duesseldorf is included in the rating of the top German departments specializing in radiation therapy!

The department offers the full range of treatment of oncological diseases using ionizing radiation by means of external (teletherapy) or internal (brachytherapy) tumor radiation. The specialists of the department are doing their best to ensure the most effective cancer therapy, taking into account the very latest advances in science and medical technology, interdisciplinary cooperation and an individual approach. The Chief Physician of the department is Prof. Dr. med.
Wilfried Budach.

Teletherapy is based on a multimodal concept for treating breast cancer, prostate cancer, head and neck tumors, lung cancer, abdominal tumors and whole-body radiation. Radiosurgery and intensity-modulated radiation therapy refer to the most advanced radiation methods and are used in complex clinical cases (for example, localization of cancer in the brain, head and neck or in the abdominal cavity). Brachytherapy is used as an independent method or as an addition to teletherapy for the treatment of gynecological tumors, ENT tumors, lung, esophageal and soft tissue tumors.

The department specializes in the treatment of the following diseases:

The therapeutic spectrum of the department: