Department of General and Abdominal Surgery

Department of General and Abdominal Surgery (26134) 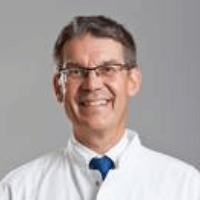 Specialized in: general and abdominal surgery

According to the Focus magazine, the Department of General and Abdominal Surgery at the University Hospital Frankfurt am Main ranks among the top German departments specializing in bowel cancer treatment!

The department offers the full range of classical and minimally invasive methods for the treatment of common surgical diseases, cancer pathologies, diseases of the endocrine organs, proctological problems. The specialization also covers transplant surgery (liver, kidney and pancreas transplantation). The department is certified by the German Cancer Society for its outstanding results in the treatment of bowel, pancreatic, stomach and liver cancers. The Chief Physician of the department is Prof. Dr. med. Wolf Bechstein.

As part of the Interdisciplinary University Cancer Center, the department has all the necessary resources to provide comprehensive and customized treatment of oncological diseases using all conventional and innovative therapeutic options. In particular, the department's surgeons are experts in the treatment of liver metastases.

Prof. Dr. med. Wolf Bechstein is a German surgeon. His clinical focuses include immunosuppression after organ transplantation, treatment of chronic transplant rejection, prevention of hemorrhages during liver transplantation and surgical treatment of neuroendocrine tumors of the gastrointestinal tract.

The doctor received his medical education at the Hannover Medical School (1977 - 1983) and at the Imperial College School of Medicine in London (1980 - 1981; grant from the German Academic Exchange Service). On October 28, 1983, he passed State Medical Examination (Examination Commission of Lower Saxony), and on November 10 of the same year he was admitted to medical practice (Medical Association of Lower Saxony). In 1984, he defended his doctoral thesis on the subject: "Hemorrhage due to the knee joint injury in severe type of hemophilia A" (1979 - 1982 hemophilia research).

In August 1988, Bechstein became a doctor in the Department of Surgery at the Charite University Hospital Berlin (now the Department of General and Transplant Surgery), Campus Virchow. Some time later, he simultaneously worked at the Medical Faculty of the Humboldt University of Berlin. In 1990, Prof. Bechstein went to the University of Wisconsin in the United States for one year (German Research Foundation Scholarship).

In April 1992 he held the position of the Senior Physician, and in November of the same year he became a Surgeon of the Berlin Medical Association. In 1993, he held the position of the Senior Physician. One year later he had his habilitation at the Free University of Berlin. Since 1998, he has worked as Senior Physician (his activities were mostly focused on abdominal surgery). On September 4, 2000, he was appointed as Head of the Department of Surgery at the Bochum-Langendreer Clinic (Knappschaftskrankenhauses Bochum-Langendreer). On November 14, 2000, Wolf Bechstein was appointed as Professor of the Faculty of Medicine at the Humboldt University of Berlin.

Since August 1, 2002, he has been holding the position of the Chief Physician in the Department of General and Abdominal Surgery at the University Hospital Frankfurt am Main.