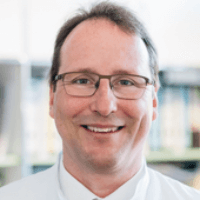 The Department of Adult and Pediatric Orthopedics, Foot Surgery offers the full range of services for the diagnostics and treatment of musculoskeletal diseases: bone, joint, muscle, ligament and tendon diseases. Special attention in the department's clinical practice is paid to knee and hip replacement surgery, including revision interventions to replace previously implanted prostheses, treatment of foot diseases, musculoskeletal cancers, orthopedic diseases in children. In addition, the department's specialists deal with the treatment of rare and especially complex musculoskeletal diseases. The department's highly specialized medical team applies only modern diagnostic and therapeutic techniques in their practice, and the long-term experience of doctors guarantees top-class surgical and conservative treatment. As a certified Maximum Care Endoprosthetics Center, the department's doctors annually perform more than 1,000 surgical procedures for partial and total joint replacement. Every year, more than 10,000 patients entrust their health to the department's medical team. Whenever required, doctors from related medical specialties are involved in the treatment process. The main goal and focus of doctors is to maximally restore the patient's health and give him the opportunity to return to his usual way of life. The department is headed by Prof. Dr. med. Rüdiger von Eisenhart-Rothe.

For more than 50 years, the department has been performing knee and hip joint replacement surgery – not every medical facility has such a wealth of experience. In addition, the department's specialists demonstrate high success rates in such operations. In most cases, joint replacement surgery is performed using minimally invasive techniques, including the AMIS technique, so that postoperative recovery does not take much time. In some cases, robot-assisted surgical techniques (Mako) are used during knee replacement surgery. The department's surgeons annually perform over 1,000 surgical procedures for knee and hip replacement, as well as about 400 operations to replace previously implanted artificial prostheses (revision endoprosthetics). Prior to the surgical procedure, the patient undergoes comprehensive diagnostics; doctors carefully study the results obtained, on the basis of which they plan subsequent therapeutic measures. If necessary, a customized prosthesis will be implanted to the patient.

The department also holds a leading position throughout Germany in the treatment of musculoskeletal cancer. It should be noted that the department is certified as a Center for Soft Tissue and Bone Sarcomas by the German Cancer Society. Since 1972, the department has regularly held tumor boards, during which orthopedists, oncologists, radiation therapists, radiologists and other specialists jointly develop the most effective treatment regimen for each patient. The department's doctors annually deal with about 400 cases of musculoskeletal cancers in their clinical practice. In most cases, the treatment is based on surgery. Whenever possible, the department's doctors use sparing surgical techniques that maximize the preservation of limb function. If necessary, bone reconstruction is performed using the patient's autologous tissue or donor material. In some situations, in order to achieve the desired therapeutic result, doctors perform resection of not only the affected bone, but also of the joint. In such situations, the department's specialists perform complex operations, during which the tumor is removed, as well as simultaneously perform plastic surgery for the bone defect and joint replacement surgery with the use of a special prosthesis.

In the field of pediatric orthopedics, special attention is paid to the treatment of congenital and acquired malformations of the upper and lower extremities, as well as spinal malformations. First of all, the department's doctors always consider conservative treatments, and surgery is the last-line therapy.

The department also offers all modern diagnostic and therapeutic options to help patients with foot diseases and deformities. If the problem cannot be solved with the help of medication and conservative methods, surgical interventions are performed. At the same time, minimally invasive operations are always preferred.

The department's key clinical areas include: