Robotic assisted technology is the latest breakthrough in neurosurgery. Robotic Surgery Assistance or ROSA as it is commonly called, is now being used at the University clinic in Frankfurt, Germany. The advantages of using robotic surgery is minimally invasive, less pain, small incisions, reduced blood loss, quick recovery ...

Robotic assisted technology is the latest breakthrough in neurosurgery. Robotic Surgery Assistance or ROSA as it is commonly called, is now being used at the University clinic in Frankfurt, Germany.

It must be noted that ROSA doesn't replace the surgeon, it merely takes over measurements, calculations and fine works that are necessary to perform such operations. In this way, miscalculations and other human errors are avoided. The robot assistant is used especially for target specific procedures, like brain tumors, epilepsy and Parkinson. It is also used to treat aneurysms and abscesses.

In cases where surgeons need to access deeper regions of the brain, for instance to take biopsies or place electrodes, ROSA acts as an assistant. Using previously taken MRI scans, the device creates a 3D map of the brain, to determine the spot, as well as the angle, where the hole has to be drilled into the patient's skull, kind of like the way your GPS works. This kind of precision reduces the risk of damage to vessels and functional areas of the brain.  Prior to ROSA neurosurgeons used stereotactical holders, a metal frame with two axises that look similar to a sextant. The head of the patient was fixed into the frame and scanned by a CT. The scans helped determine the localization of the procedure with coordinates, which had to be adjusted to the frame. Here there has always been a risk of transmission errors. ROSA now performs the same task but in a considerably less time.

In a recent case, the patient underwent a biopsy for a brain tumor. The patient first experienced epileptic seizures. After further tests, the doctors found a shadow on the scans, suspecting a tumor. The doctors now want to confirm the diagnosis and determine if the tumor is benign or malign. The patient receives general anaesthetic, which according to Dr. Freiman is not really necessary, because brain operations don’t hurt. During some brain operations, the patient has to be awake, for instance to  monitor speech and motor functions.

The patient's head is first fixed at three points in the metal frame of the device, so that the position of the head doesn’t move during the operation. In the case of a seizure, he or she must not be able to break free. After calibration, the robot arm scans the face of the patient. It orientates itself on certain landmarks, like the nose or the beginning and end of the eyelid. The first scan the device performs by itself, a second scan is performed by the surgeon, just to be safe. Then the computer calculates the optimal entry point while the robot arm indicates that spot with a laser on the skin. The doctor marks that spot with a pen. After this, doctors check to see if the robot arm and the instruments can actually reach the target, or the device has to be moved into another position. Then only will the machine and the patient be covered in sterile drapes and the operation spot will be disinfected. In addition, the patient receives IV fluids and antibiotics.

The robot arm places a guidance tube for the drill on the calculated spot. This guidance makes sure, that the entry angle is correct. During the drilling, bone particles and blood is being sucked away. A bleeding could lead to permanent damage. As soon as the intended position is reached, which Dr. Freiman can see on ROSA's monitor, he takes several biopsies. The pathologist examines some of them immediately, inside the theatre under a microscope, to ensure that the actual tumor was hit. The rest will be analysed in the lab. In the past, doctors would have waited when they found a benign tumor. Today aggressive chemotherapy is administered sooner than later. This, however, doesn’t apply to brain tumors of children though, because the undeveloped brain is often damaged during chemo and radiation. So in these cases, biopsies are very important to determine, if a treatment is actually necessary. ROSA offers a gentler procedure. It doesn’t require the mechanical pressure, which can deform the soft skull of children, as well as the radiation of a CT. The technique may soon be used for a new therapy of deep, inoperable tumors, this is currently in the clinical trial phase. Using a catheter, viruses and killer cells are placed inside the tumor to activate the immune system, which also attacks the tumor cells.

The epileptologists  want to use ROSA to place electrodes for a EEG inside the brain. Many epileptic seizures originate in the depth of the brain. With a standard EEG those epicenters can’t be found.

Also Parkinson patients receive implanted electrodes to stimulate certain areas of the brain. This brings  great relief to those, who don’t respond to medication any more.

Frankfurt University Hospital  bought the 500,000 Euro device from the French manufacturer Medtech. Making it the first University hospital to advance itself with robotic technology.  The technology is also being used for research. ROSA is likely to be used for about 10 percent of the 2000 procedures by neurosurgeons. The investment pays off after about 3 years of use. 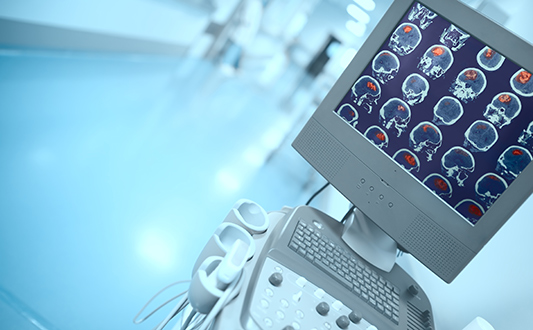 High-tech Visualase™ system makes complex neurosurgical procedures much more comfortable for patients. Once a doctor recommends that you undergo brain surgery, you should definitely check to see if this technique is suitable to your medical... 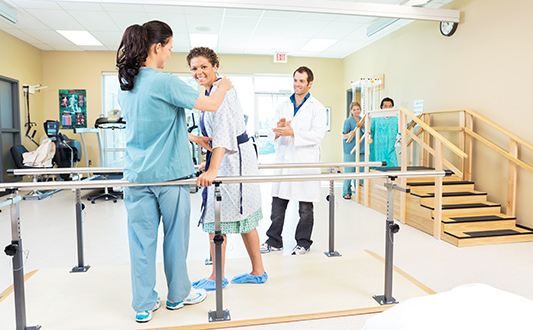 Neurological rehabilitation is a complex of therapeutic measures aimed at restoration of person’s working capacity or ability to fulfill activities of daily living without assistance after a disease or surgery. Children with cerebral palsy,... 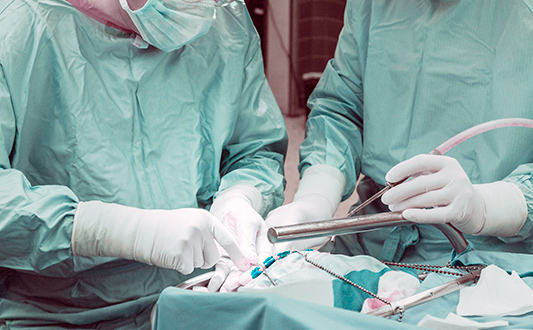 Endoscopic operations continue to displace traditional open surgical interventions. In recent years, endoscopy has been introduced into the field of neurosurgery. It allows a surgeon to perform tough operations on the brain and spinal cord with minimal...